DHT: how does it cause hereditary hair loss?

Alopecia Androgenetica, or hereditary hair loss, is the most common type of hair loss. In case of Alopecia Androgenetica, the sensitivity to DHT (dihydrotestosterone) plays a large role. It could be said that DHT is the biggest enemy to the hair: it shrivels the hair follicles, causing increasingly thinner hair to grow out of them. In this article we will provide more insight into hereditary hair loss and DHT.

Alopecia Androgenetica (AGA) is the Latin name for genetic baldness according to the male pattern. Although this type of hair loss is strongly associated with men, AGA affects both men and women.

Hereditary hair loss in men
It is estimated that around 70% of men will suffer from AGA. In men, this often begins between the ages of 20 and 40 years old, but it can start as early as in the teenage years. The hair loss usually starts with a receding hairline and thinning hair at the crown and temples. 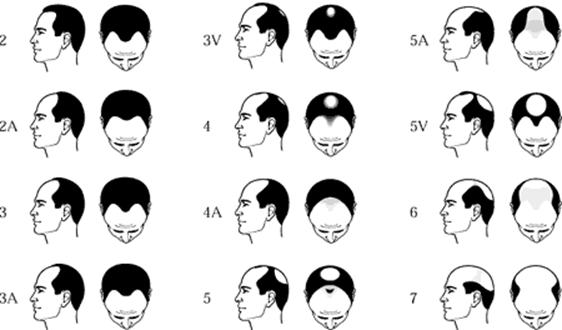 The speed in which hair loss develops itself varies greatly per person. In one, full baldness may occur within a matter of years, in another this could take decades.

There is also a lot of variation concerning the progress. Some men only lose little hair and will just end up with a receding hairline or a bald spot on the back of the head. In 7% of all cases, AGA develops to the most advanced stage, whereby only a 'wreath' of hair will be left (Norwood scale 7). In men whose hair loss started at a young age (before 30) it is more likely that the hair loss develops until it reaches this stage.

Hereditary hair loss in women
In women, AGA generally progresses differently than in men. Because the term 'male pattern baldness' can be confusing, the term 'female pattern baldness' is often used for women. In women with hereditary hair loss, the hair on top of the head is increasingly becoming thinner. The hair loss often starts around the middle parting and continues to widen. The scalp becomes increasingly visible through the hair. Most women do not get bald spots. The front hairline usually also stays intact. In a small percentage of women, the hair loss will follow a pattern similar to that in men.

For estimating the degree of hair loss in women, the Savin or Ludwig scale is used. Read what you can do as a woman against hereditary hair loss.

The most common cause of AGA: DHT
Research in men shows that Alopecia Androgenetica is in virtually all cases the result of sensitivity to the hormone dihydrotestosterone (DHT). Under influence of DHT, the hair follicles become smaller. The hair follicles than produce hairs that are thinner and will grow less long.

In women, DHT also plays a big role in hereditary hair loss, but other factors also appear to be important. Until now, studies have not been able to give a clear answer on this. Because of this, for a hair growth treatment it is of importance to both inhibit DHT and stimulate hair growth.

DHT is a male hormone which occurs in both men and women. DHT is similar to testosterone, but it has an androgynous effect that is three times as strong as testosterone.

DHT is formed under influence of the enzyme 5-alpha-reductase. This enzyme is responsible for the conversion of testosterone into dihydrotestosterone. There are two types of this enzyme: 5AR type 1 and 5AR type 2. Research shows that type 2 mainly occurs in the hair follicles and it seems like type 2 plays a bigger role in AGA than type 1. 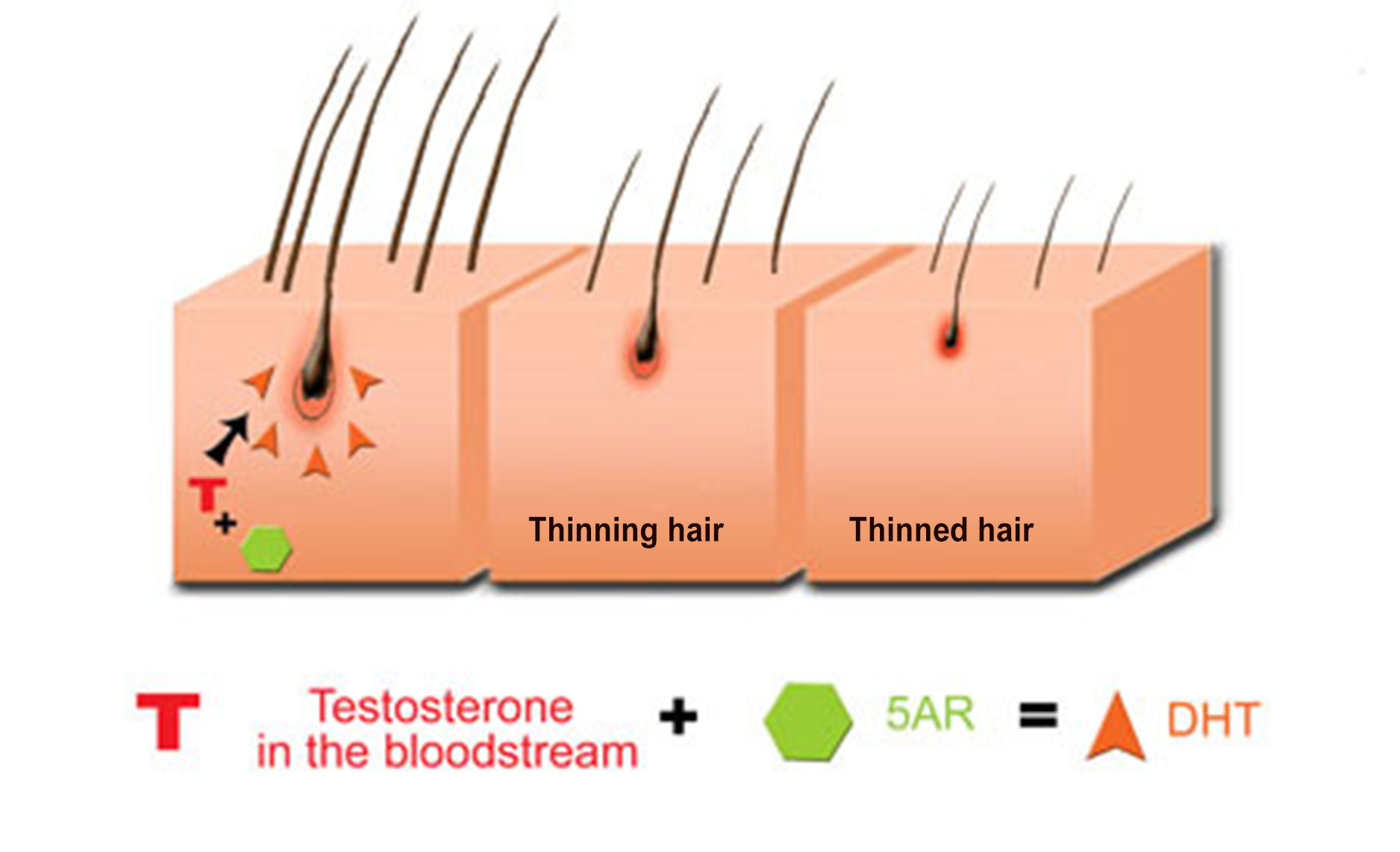 The attachment of DHT to the androgen receptors ensures for a shorter growth phase and a shrinkage of the hair follicle shaft. Eventually the hair follicle has been shriveled up to such an extent that only a minuscule (invisible for the naked eye) vellus hair is produced by it. This process is known as miniaturization of the hair. In short: each hair cycle ends with thinner hair. It is however not so that the hair fully disappears.

In people who are predisposed to AGA it is genetically determined that only the hairs on top of the head are equipped with androgen receptors. This explains why hair on the side and the back of the head is not lost.

There are various means available on the market to inhibit the formation of DHT by reducing the production of the enzyme 5-alfa-reductase. Finasteride and Dutasteride and known drugs that can be prescribed for this.

Additionally there are many natural ingredients such as Saw Palmetto, Ecklonia Cava and EGCG (green tea extract) that have a scientifically proven DHT inhibiting effect. Ketoconazole and Piroctone Olamine, well-known ingredients against dandruff and eczema, are also DHT inhibitors.

In addition to inhibiting DHT, the hair growth can also be stimulated in other ways. This is why our hair growth products contain various ingredients that stimulate hair growth, together with DHT inhibitors. Such as by extending the growth phase, so that the hairs grow longer and more hairs are growing at the same time. Moreover, ingredients that nourish the scalp are important, seeing as hair loss can be caused by inflammation of the scalp and seborrheic eczema.

What products are best for you?

Before starting a treatment, it is important to know what type of hair loss you are suffering from. If you are not sure about the cause (in women the cause can be less obvious), please consult a doctor. It is also important to determine what stage your hair loss is in.

Determine with the help of the table in this article what treatment is best for your type of hair loss.

Are you looking for a good shampoo, but you are not sure what shampoo is best for you? Take a look at the extensive comparison of our shampoos against hair loss.

Lotions provide an effective treatment directly on the scalp. All lotions against hair loss can be found in this overview.