You have probably heard of Rogaine. Or Regaine. Perhaps you have read that it contains minoxidil or actually is minoxidil. But which is which? All those names and variations are quite confusing. To clarify, we put Linn Minoxidil from Linn Pharma next to Rogaine and explain the differences. 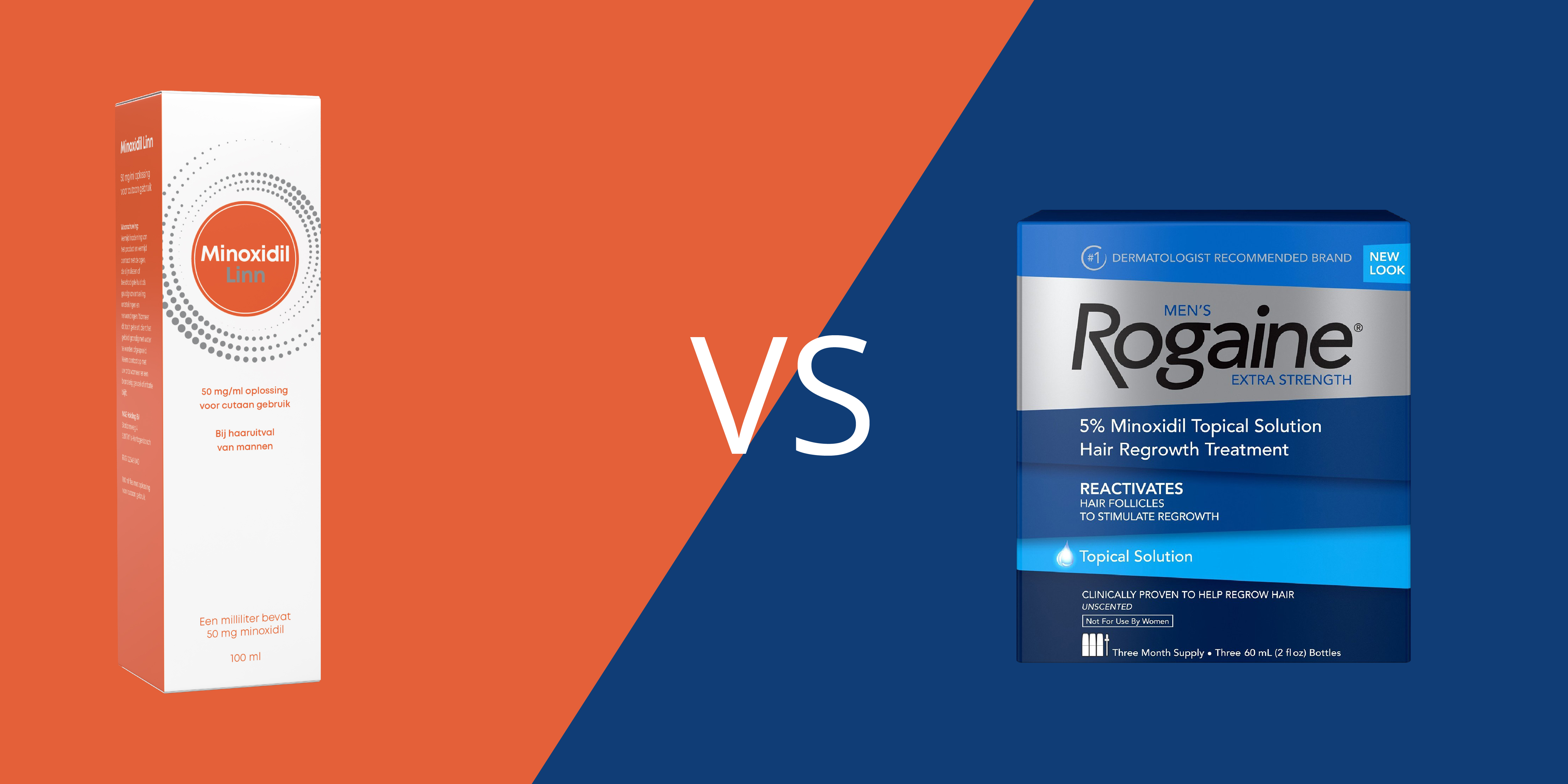 Regaine is the brand name of a popular product for combating hair loss. Rogaine is the name by which the drug was marketed in the United States. Both products are made by the large American pharmaceutical company Johnson & Johnson. Now that sales are increasingly taking place online, these two names are often used interchangeably. Why Johnson & Johnson use different names for it is not entirely clear. Which makes the confusion understandable. But what is minoxidil then? That is the name for the active ingredient in Rogaine that combats hair loss. Minoxidil is therefore the active drug in Rogaine, but also in Linn Minoxidil from Linn Pharma.

After the discovery of the hair growth stimulating effect of a blood pressure lowering drug called Loniten, minoxidil was further developed as a drug specifically for the treatment of hair loss. This lotion appeared on the market as Rogaine in 1988. With this, Rogaine became the first officially registered and proven hair growth drug. Much research has been done over the years to explain the effect of minoxidil on hair growth. However, its effect is still not exactly known. The most recent theory is that it is because minoxidil belongs to the group of drugs called potassium channel openers (PCOs). It seems that PCOs stimulate hair growth.

The difference between Linn Minoxidil and Rogaine

The difference between the two products is basically not very big. The active ingredient in both is minoxidil. This cannot be produced differently. However, the way in which this substance is dissolved can differ. For both products, this is done with propylene glycol and alcohol. The ratio of these can have an effect on the scalp. These two agents are found in both lotions to dilute minoxidil to the 2% or 5% percent respectively. These agents are used because they dissolve minoxidil well, but may cause an irritated reaction as an adverse side effect.

An important difference is that Linn Pharma is a Dutch company, and that Linn Minoxidil is therefore produced in the Netherlands. This means that it is a registered medicine with the Medicines Evaluation Board, while Rogaine has to be obtained from abroad.

Rogaine is also available in a foam. The difference between the foam and the solution is that Rogaine foam does not contain propylene glycol. This therefore appears to be a popular variant of Rogaine.

Conclusion: Should I choose Rogaine or Linn Minoxidil?

Linn Pharma is a Dutch pharmaceutical company that has to comply with Dutch legislation, which means that the standard with which this product has been developed is high. Rogaine is a product that is not officially offered on the Dutch market. It can only be ordered online at foreign webshops. Although minoxidil can be bought without a prescription in the Netherlands, Dutch customs consider it to be a medicine, which cannot be imported from abroad by post. Why this can be found online, is because customs cannot look into all packages and if it is not mentioned on the package that minoxidil is contained in it, it is often not intercepted.

The ultimate difference is in the name recognition of the two brands. Linn Minoxidil is less known than Rogaine, but in any case, 100% legal and safe to buy in the Netherlands.

Traction alopecia: hair loss caused by tightly styled hairstyles Going bald at 20 – What now? Transgender woman with hair loss? What are the options Hair loss because of weight loss? Help! Apart from weight, I am also losing hair Hair loss in people with frizzy hair Curly Girl method and hair growth Hair loss after corona? What to do Does caffeine shampoo work against hair loss? How does beard oil work? What to do about frizzy hair? The best hair oil for your hair Can you make your hair grow faster? You spotted a bald spot on your head. What now? Flakes on the scalp, but not dandruff? How to best use minoxidil for women? Advice for when dealing with an itchy scalp Suffering from dry scalp? Dandruff in your hair, what to do? 5 tips for a fuller beard(growth) 4 steps to prevent dry and damaged hair Top 3 easiest treatments for hair growth 2022 Summer tips for your hair: useful tips against hair loss in the summer SugarBearHair Vitamins: do they work?